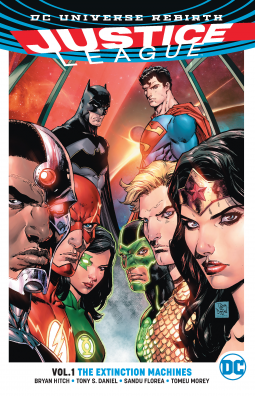 From the publisher: A part of DC Universe: Rebirth!

Spinning directly out of the events of DC UNIVERSE: REBIRTH, a new day dawns for the Justice League as they welcome a slew of new members into their ranks. The question remains though, can the world's greatest superheroes trust these new recruits? And will the members of League be able to come together against an ancient evil that threatens to reclaim not just the world, but the entire universe!

As the League begins to work together following Rebirth, the Green Lanterns and the new Superman are trying to find their way. They begin by facing a nasty foe called a Reaper, who warns them that something worse is coming. The main story arc deals with this "something worse". As earthquakes rock the world, large groups of people become "possessed", speaking about stolen powers, words, speed, and light, and something known as the Kindred. Meanwhile, strange bug-like alien creatures are landing all over the world, looking to start the Purge. The Justice League is split up, trying to deal with all these issues at once. As they realize they need help, Batman is forced to call on the new Superman, whom he is very suspicious of. Superman has his own doubts, as he has grown accustomed to hanging in the background.

Hitch does a fine job escalating the threats with each successive issue. They are truly worthy of being dealt with by the Justice League. He also gives each character his/her own star turn, making sure that no one is underused. Of particular note is his characterization of Superman, and how he is trying to reconcile his past with this new (to him) group of heroes that have previous relationships with the now-deceased New 52 Superman. Batman and Wonder Woman in particular are struggling. Additionally, both Green Lanterns are relatively new and inexperienced, and their development into stronger characters gets off to a good start. Flash, Cyborg, and Aquaman all play their roles well. Finally, Hitch has set up future storylines nicely with his first Justice League arc.

I enjoyed Justice League Vol. 1. Bryan Hitch is off to a good start on one of DC's flagship titles, and the future looks bright as well. I highly recommend this book to fans of the Justice League, as well as new readers looking for a good jumping on point.